From the editors of Cabinet Magazine 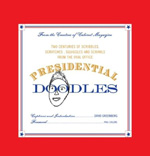 What were the leaders of the free world really doing during all those meetings? As the creators of Cabinet magazine and historian David Greenberg reveal here, they were doodling. Our Founding Fathers doodled, and so did Andrew Jackson. Benjamin Harrison accomplished almost nothing during his time in the White House, but he left behind some impressive doodles. During the twentieth century–as the federal bureaucracy grew and meetings got longer–the presidential doodle came into its own. Theodore Roosevelt doodled animals and children. Dwight Eisenhower doodled weapons and self-portraits. FDR doodled gunboats, and JFK doodled sailboats. Ronald Reagan doodled cowboys and football players and lots of hearts for Nancy. The nation went wild for Herbert Hoover’s doodles: A line of children’s clothing was patterned on his geometric designs.Featured in The New York Times Book Review, CNN’S Situation Room, CBS Sunday Morning with Charles Osgood, and All Things Considered.

The creators of Cabinet magazine have spent years scouring archives and libraries across America. They have unearthed hundreds of presidential doodles, and here they present the finest examples of the genre. David Greenberg sets these images in context and explains what they reveal about the inner lives of our commanders in chief. Are Kennedy’s dominoes merely squiggles, or do they reflect deeper anxieties about the Cold War? Why did LBJ and his cabinet spend so much time doodling caricatures of one another? Presidential Doodles offers a glimpse into our presidents’ most unguarded moments.

“This book sets a new standard not just for scholarly treatment of presidential doodles, but for Doodle Studies in general. David Greenberg’s introduction is, at one level, a masterpiece of pointless erudition, and, on another level, highly informative and entertaining. If you read only one book on presidential doodles this year, make it this one.”

Founding editor of Slate, columnist for the Washington Post

“President Kennedy was famous for his incessant sketching, but who knew that Andrew Jackson also drew? Sure, he didn’t draw that well, but that he did so at all is a bit of a revelation. And so are the rest of the presidential doodles, idle notes to self, and other scribblings collected here. The book brings White House history alive in sometimes perplexing, sometimes amusing, but always intriguing ways”

Author of The Rise of American Democracy: Jefferson to Lincoln, Princeton University

“This person who just wrote Presidential Doodles—fascinating topic. I wish I had done it.”

“As revealing as the heftiest biography.”

“Reading presidential doodles is like looking at the private psychological files of our commanders-in-chief. Each doodle is like personally-rendered Rorschach blot—a glimpse into the presidential psyche. And, somewhat surprisingly, I found myself sympathizing with our presidents: How could one person—even a flawed, horrible person—deal with so much?”

Novelist, author of of Wake up, Sir!, The Extra Man, and I Love You More than You Know

“This provision isn’t in the Constitution but probably ought to be: All tomes by highfalutin presidential scholars shall be sold only as a package with Presidential Doodles”

“Some are funny. Some are suggestive. Others are downright chilling.”