Nixon’s Shadow: The History of an Image 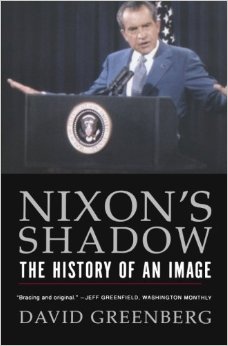 To his conservative supporters in the 1940s, he was a populist everyman. To liberal intellectuals of the 1950s he was Tricky Dick, a devious manipulator. To 1960s radicals, a shadowy conspirator. To Washington reporters, a clever spin doctor. Middle Americans, a scapegoat. To psychologists, a paranoiac. To foreign-policy hands, a statesman. And to recent historians, an unlikely liberal.

Drawing on new archival research as well as television, movies, cartoons, and songs, Nixon’s Shadow rediscovers these competing views of our most controversial president and shows how each took hold in the American imagination.

Uniquely image-conscious among postwar politicians, Richard Nixon pioneered new methods of shaping his political persona. Often he could be staggeringly successful, as with his 1952 “Checkers” speech or his 1972 trip to China. But just as often his ploys backfired, revealing how thoroughly his politics–and all modern politics–relies on manipulation. After Nixon’s half-century on the national stage–and after the colorful parade of “New Nixons” described herein–it has become impossible to discuss politics without asking the questions he brought to the fore: What is the politician’s “real” character? What image is he trying to project?

“A brilliant book full of fresh insight and analysis by one of the most original young minds among professional historians. The first serious and comprehensive look at Nixon by a writer of the new generation, Nixon’s Shadow is thoroughly fair-minded and yet critical. Under the scholarly microscope Nixon again fails to conceal his self-inflicted wounds.”

“I am hard pressed to think of a book on politics as bracing and original as this one.”

“[Greenberg] goes boldly where few men (and fewer liberal historians) have gone before.”

“A penetrating analysis of how the president’s legacy has altered American politics irrevocably.”